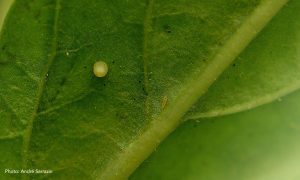 The egg is the first stage in a monarch’s life – where its life gets started.

In the wild, a female monarch can lay 300 to 400 eggs in the space of a few weeks. Females usually lay one egg per milkweed plant, gluing it to the underside of a leaf to protect it from nasty weather. Don’t be surprised, though, if you find several eggs on the same plant or even on the same leaf.

Monarch eggs are 0.9 to 1.2 mm long. They are creamy yellow and covered in narrow longitudinal ridges. They hatch 3 to 8 days after being laid. 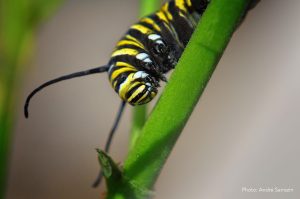 Just like an adult, a caterpillar’s body is divided into three sections: the head, thorax and abdomen.

It has tiny, almost invisible, antennae on its head. Although it has twelve ocelli (simple eyes capable of perceiving variations in daylight), it doesn’t see very well.

The caterpillar has black filaments near its head (2nd segment) and at the tip of its abdomen. While these are not antenna, they do have a sensory function.

There are “false legs” under the caterpillar’s abdomen. These are actually like hooked suction cups that help the caterpillar move about and cling to a leaf when feeding. 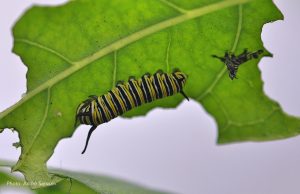 A caterpillar spends most of its time eating! Its first meal, immediately after it hatches, is its egg case, which provides it with vital nutrients. Then it starts on milkweed.

Monarch caterpillars feed exclusively on milkweed – making them specialists. They are one of the few species able to tolerate milkweed’s poisonous sap and even to accumulate the cardenolides that make them poisonous in turn. 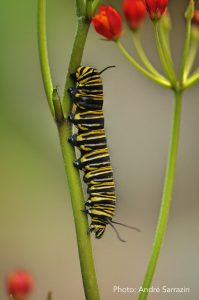 Moulting in order to grow

With all this eating, a caterpillar grows quickly. In 7 to 17 days, its weight increases 2,700 times! If humans grew that quickly, we’d be as tall as the Statue of Liberty in just 2 weeks. To keep up with the growth, its body has to adapt. That means a caterpillar undergoes five successive moults, or instars (also called larval stages).

Each of these moults gives it a slightly larger external skeleton, allowing it to continue growing. The caterpillar’s size may change a lot during each instar, but some of its body parts stay the same. The head and the black filaments get larger only when it moults.

Only 10% of all caterpillars reach the pupal stage. Although their toxic defences are effective against predators like birds and mammals, invertebrates are less affected. So lots of caterpillars do fall victim to predators or parasites. 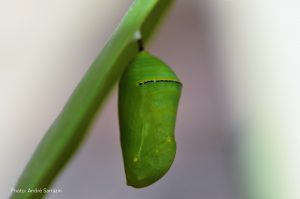 All butterflies pupate: this is the third stage in their life cycle.

A caterpillar usually leaves the milkweed plant during the fifth instar to go in search of a well-camouflaged spot high off the ground, where it can pupate. Once there, it weaves a tiny silk pad as an anchor. It then inserts the hooks at the tip of its abdomen into the anchor and assumes a J shape. It stays in this position for 12 to 48 hours before extracting itself from its caterpillar skeleton – it is now a pupa.

In the pupal stage, monarchs are amazing camouflage artists! Since they can’t move for several days – making it difficult for them to defend themselves, other than with their toxicity – they need an effective disguise.

Its turquoise-green colouring, gold spots that reflect light and small size (3 cm) make a pupa very difficult to spot in the wild. It gradually changes from jade green to bluish, until the adult colours show through the transparent case. After 8 to 15 days, the adult butterfly finally emerges from the pupa case. 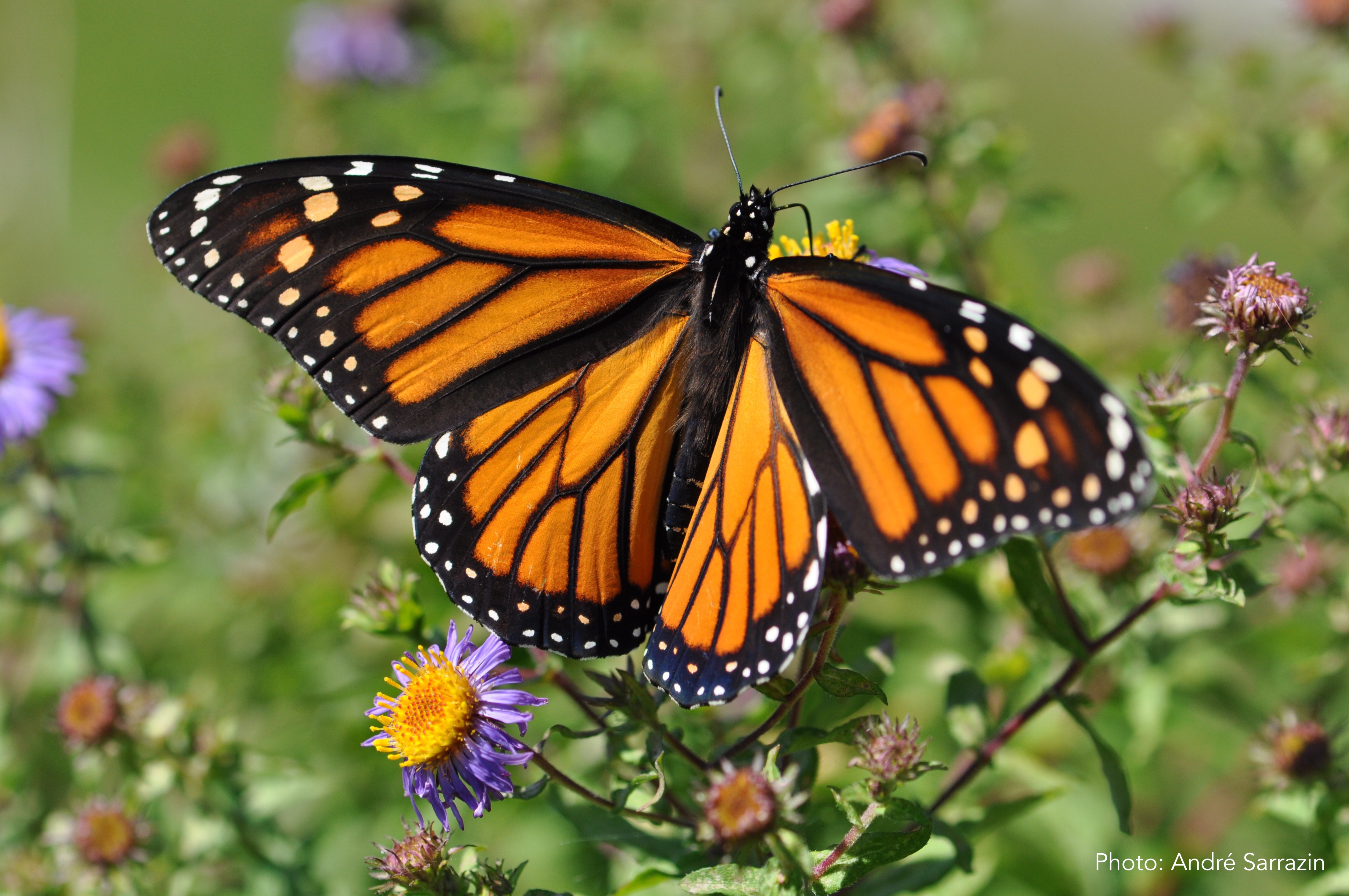 Finally, the pupa splits open to let the adult butterfly wriggle free. Clinging onto its pupa case, it then “pumps” hemolymph (insect “blood”) through the vessels in its still-wet wings. Its abdomen shrinks as it empties of the hemolymph and the metabolic waste that accumulated during the previous stages.

Within about 4 or 5 hours, the wings will have unfolded and stiffened and the butterfly can take flight. First stop: a nectar-bearing flower so that it can stock up on energy. Adult monarchs are generalists: they can feed on different flower species, provided that they have lots of nectar to offer. 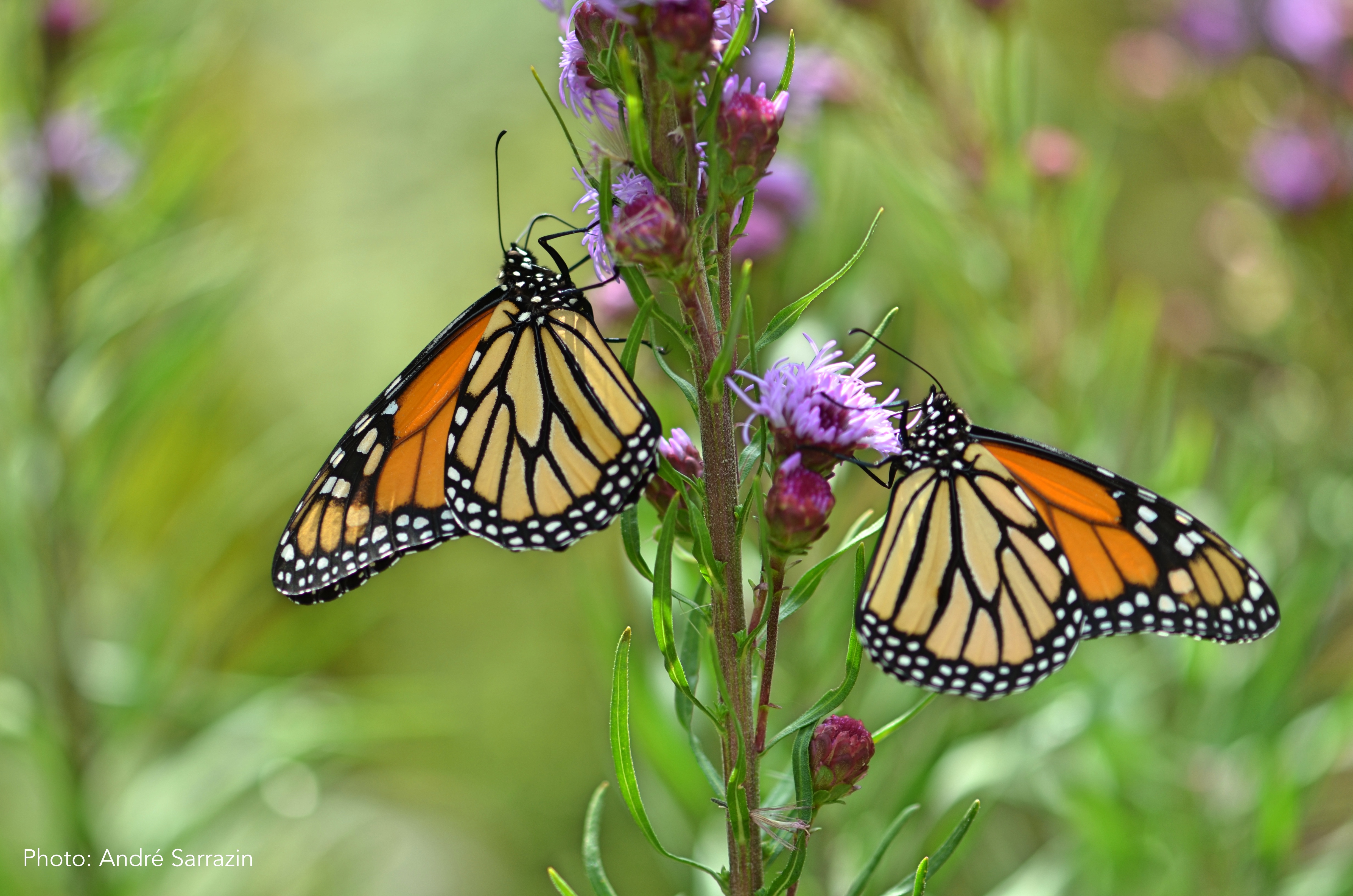 Reproduction at any cost!

After it has feasted, the butterfly can concentrate on its main job as an adult: reproduction. So both males and females start seeking a partner.

Once fertilized, the female heads off in search of milkweed plants to lay her eggs. She lays hundreds of them in just a few weeks. 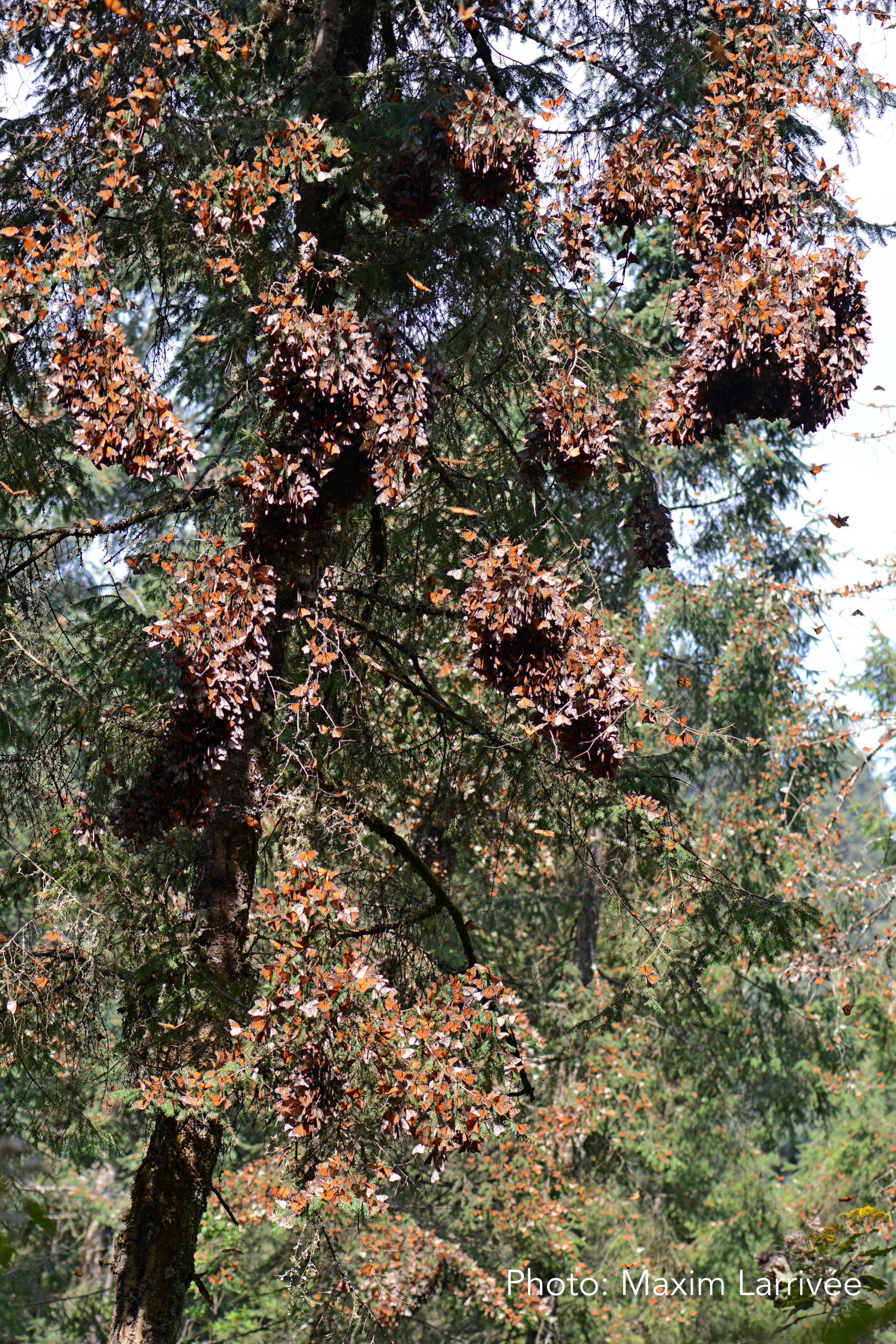 The butterflies that emerge in late August and into September don’t launch immediately into reproduction, however. They are a very special generation of monarchs: the migratory generation. To preserve as much energy as possible for their coming odyssey, their reproductive organs don’t fully develop.

This generation heads off on an amazing journey that takes them all the way to the mountains in central Mexico where they overwinter. Only with the increase in daylight the next spring will their reproductive organs finish developing.

While adult monarchs usually live for three to five weeks, the adults in the migratory generation survive for up to eight months.