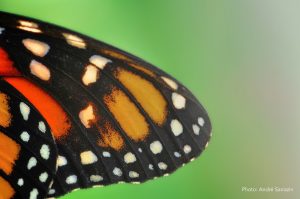 Monarchs are animals with articulated legs, making them arthropods. This phylum includes not only insects and spiders, but also crustaceans, millipedes and lots of others. With their three sets of legs, bodies divided into three parts (head, thorax and abdomen), antennae and two pairs of wings, monarchs are perfect insects.They are also holometabolic insects – which means that they undergo complete metamorphosis during their lifetime, moving through four completely different-looking stages. Monarchs go from being eggs to caterpillars, pupae and then adults.

Butterflies and moths belong to the Lepidoptera order. The Greek root “lepido” means “scale” and the root “pteron” means “wing.” In other words, butterflies have scaled wings! In fact, it’s the tiny scales on butterflies’ transparent wings that create their beautiful wing patterns and colours. 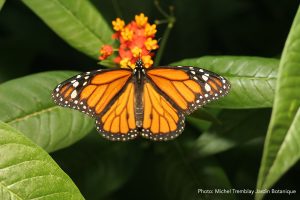 There are various ways to tell males and females apart, despite their great similarity.

Males have an oval black spot called an androconial patch on each hind wing. Females don’t have these spots, but do have wider black veins than males.

Females in the migratory generation live slightly longer than males. The males usually die in the spring, shortly after mating, whereas the females start migrating north to lay their eggs. 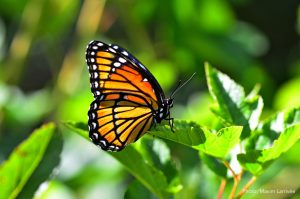 Monarchs aren’t the only orange butterflies you can see in North America. Some species look so much like monarchs that it’s easy to confuse them. Viceroys, for instance, have similar patterns and colours to monarchs. You have to look at their size and wings to tell them apart. Viceroys have a black line across the veins on their hind wings, while monarchs don’t.